Time once again for another year in review. Like my love of the Bourne series, this comes to you in two parts.

Reading back over my 2016 post it doesn’t feel like much has changed. In fact, it might actually be worse. I’ve spent a large proportion of the last few months feeling unwell, I’m not enjoying my degree, my grades fell short of what I’d hoped for, and if one more person tells me I look tired I swear to god I’m just gonna go to sleep right then and there. It would be dishonest to say there haven’t been successes though.

I ran another 10k (intentionally this time) getting a decent time, and have ran close to a half marathon during training. I’ve played Quidditch better than ever and enjoyed success with Manchester and Yorkshire, both of whom I’m now managing over the 2017/18 season.

Time management has always been a sore spot for me, but over the last year it’s improved in almost every aspect of life. I’ve got better at delegating tasks and asking for help when needed; from moderating subs to running societies there’s no job now where I feel like I’m doing it alone.

Surprisingly I’m also pretty happy with where I got with “Say thanks, not sorry too. I’m not perfect with it by any means but better and going forward feel it can be integrated into general self-care.

After two years of not-so-good results I’m determined to recapture the success of 2015, so the tactic is changing a little going into this year. With the resolutions I consistently struggle to keep the issue seems to be finding it difficult to form new habits. 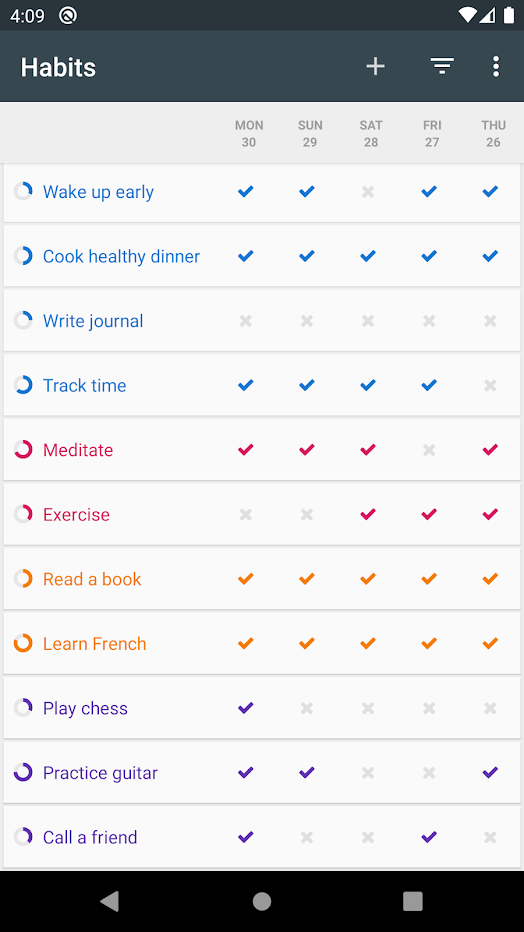 To help in tracking my sticking to these habits I’m using a great little app called Loop, which is available on Google Play and F-Droid. In the weeks running up to today I played around with a few different apps (both FOSS and proprietary) and this was the one that seemed to gel with how I work.

There are three broad areas into which I’m focusing my improvements: academic, creative, and health. Most are pretty self explanatory, but there are a few I want to mention.

Creative writing has really fallen by the wayside over the last few years, especially with prose. I’ve written the occasional poem but I haven’t written prose in a few years now. This year I’m challenging myself to write a side of A4 every day.

Update diary has replaced “The Week That Was”. While I did enjoy the self-reflection writing the blogs gave, it did start to feel more like a chore. My sister got me a One Line a Day diary last Christmas so I’m just using that now which is working much better.

To make sure there’s an unambiguous win condition, each of these must be completed for 85% of the days in 2018. Thanks to the great stats features in the app I should be able to get consistent feedback on how I’m doing with that.

Despite the focus on the smaller habits, I do still have some big goals that I want to achieve in 2018:

Will I succeed in these tasks? Will I make it to the end of the year with my faculties still in tact? Tune in next year to find out!