At the 2021 Sutton Trust summer school a student asked us for help with an integral she’d been struggling with:

What followed was a dive down the rabbit hole of history, travelling from work of the mathematical greats to the depths of Google Group archives, all to answer one question: what’s the deal with the circumference of an ellipse?1

Why doesn’t it exist?

That’s the circumference formula we all know and love! Ellipses are just squashed circles so logically the same should work for them right?

Oh dear. For ellipses \(\frac{\mathrm{d}y}{\mathrm{d}x}\) is already more complicated than it was for circles, and that’s before we’ve even started integrating. Maybe there’ll be some cancellations though?

at which point we stop and reconsider our life choices. This looks simple but just isn’t going anywhere.

This turns out to be what’s known as the complete elliptic integral of the second kind, a famously non-elementary integral. That is to say, it has no ‘nice’ solutions which means there isn’t an analogue to a circle’s \(2\pi r\) when looking at ellipses. To quote Gérard Michon:

Showing why it’s non-elementary though goes beyond the scope of this post.

How can it be approximated?

Lets first look at the ‘simple’ formulas that aren’t exact. Over the years there have been many different attempts dreamt up for this, but if we’re wanting truly elementary formulas then we’ve a couple prominent options.

When doing his work on orbits Johannes Kepler (1609) used the geometric average, \(s \approx 2\pi\sqrt{ab},\) to approximate the circumference. It’s very poor with a worst case error of 100%, but it was over 400 years ago so what you gonna do.

About 170 years later, Leonhard Euler (1773) gave it a bash and figured out \(s\) can be bounded below by the arithmetic mean and above by the root mean squared,

which came from computational optimization: finding the numeral rational coefficients for an equation of that form which give the least error on average over a given range of \(a\).

It’s useful to see just how far off the truth these formulas are so we plot their deviation from the true circumference. Without loss of generality, we can vary the value of \(a\) while keeping \(b = 1\); we don’t care about orientation or scale. 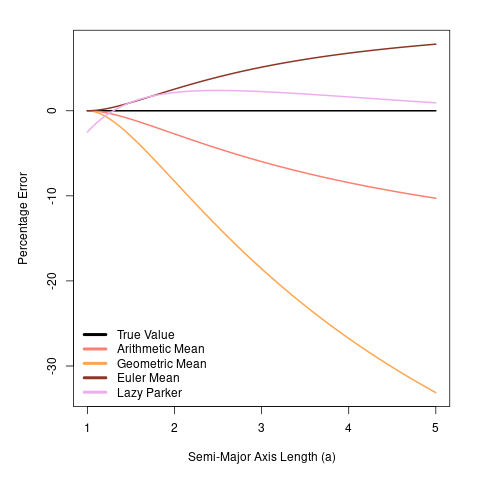 Straight away we see that, with the possible exception of Lazy Parker, all these are pretty bad for anything except a very-round ellipse. Euler’s bounds are almost symmetrically bad and Kepler’s attempt shoots way off to the bottom, underestimating by almost 10% already by \(a = 2\). 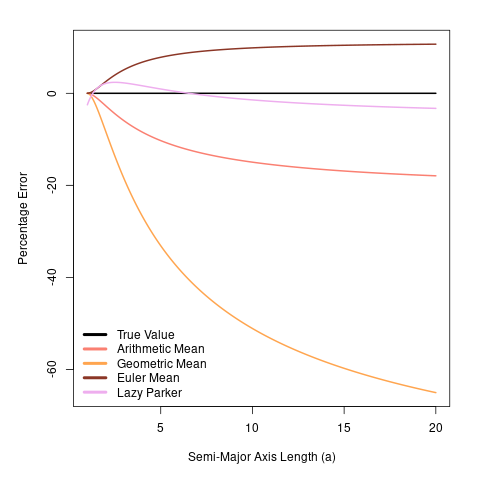 The Lazy Parker approximation continues to beat these even at the extreme value of \(a = 20\), though by then it is underestimating by 3.43%. If we’re willing to add in some more bells and whistles though we can do better. These aren’t formulas you’d want to memorise but they will get you a good answer.

It wouldn’t be maths if Srinivasa Ramanujan (1914) didn’t have a finger in the pie, and he gave two pretty nice approximations:

The latter of these is astoundingly good as we’ll see in a moment. Parker also gave an coefficient-optimized solution mimicking the former,

which has decent performance, though at the expense of complexity.

Far more recently, and coming from the unlikeliest of places, David Cantrell (2001) posted the following optimizable formula to a Google Group: 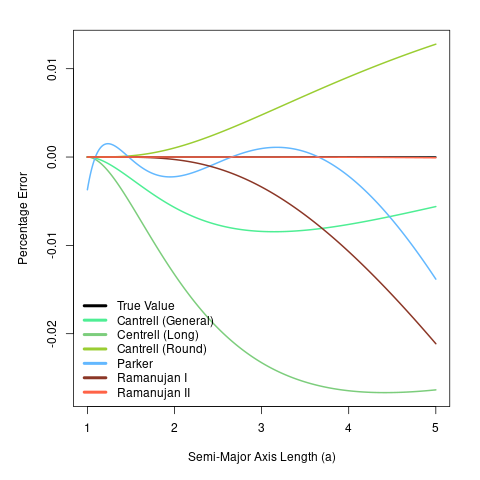 Ramanujan II is an incredible approximation and remains best right through to \(a = 20\), though Cantrell with \(p\) for elongated ellipses beats it soon after. 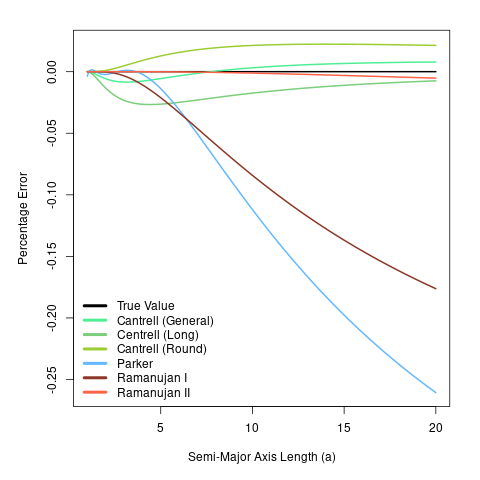 What if we look even further afield though, maybe at \(a = 75\)? At this point we might be tempted to stop and say

That’s a motivator to look further, up to \(a = 80\). There we see Ramanujan II has started to diverge more significantly from the truth and Cantrell’s approximation is winning out, particularly when

since it’s optimum for elongated ellipses. 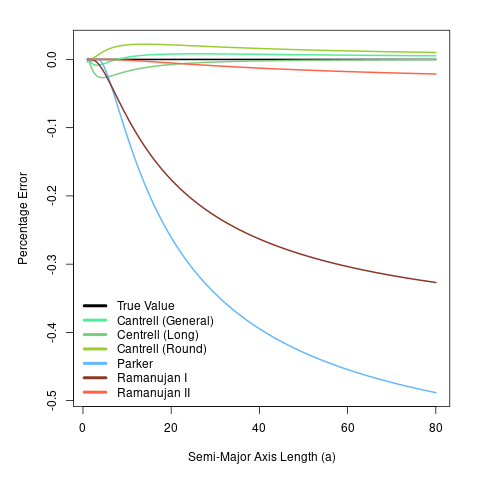 All these approximations are pretty good and even the worst among them, Parker’s, stays within 0.5% error. If we want to find the actual circumference of an ellipse though we’ll have to look beyond these approximations. For that we now turn out attention to the exact formulas that are not simple.

How do we find it exactly?

There are three main power series used for ellipse circumferences: one from Colin Maclaurin (1742),

While exact on paper these don’t converge in general. We can use them to approximate \(s\) by summing the first \(n\) terms of the power series. For example,

The amended plot below shows that summing Maclaurin’s series to \(n = 6\) is comparable to our rough approximations. 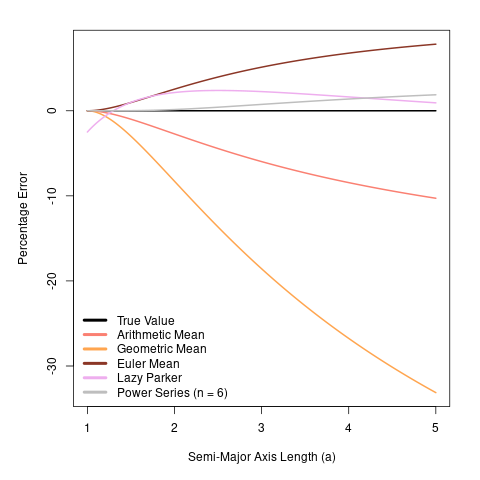 Similarly the plot below demonstrates that summing to \(n = 50\) is comparable to our higher accuracy approximations. 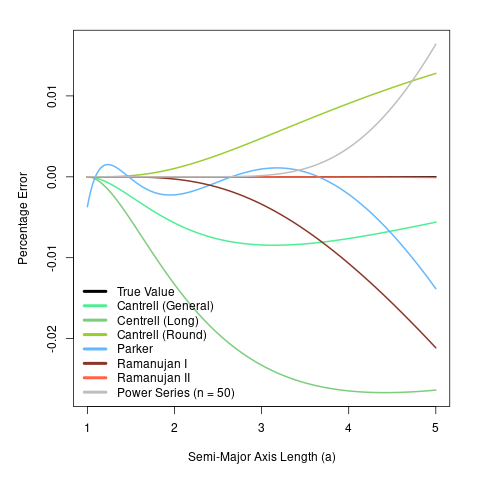 You might then think, okay, to find the exact circumference

Just use a power series to a high number of terms (Disney-Hogg, 2021)

but the practicalities turn out not to be so simple.

You might think, maybe we just need higher \(n\)? Well we can push both power series to \(n = 258\) terms9 and there is improvement. For Maclaurin it’s hardly the dizzying accuracy we might have hoped for, still being off by about 0.01% at \(a = 80\). That’s barely better than summing 10 terms Ivory, showing just how slow Maclaurin converges.

Carl Gauss (1812) & Eduard Kummer (1836)10 showed these three series could all be expressed in terms of the hypergeometric function:

This coupled with the close proximity between the two findings means Ivory’s series is usually referred to as the Gauss-Kummer series.

R’s hypergeo package can evaluate this function, only returning an answer when the terms have converged within machine-epsilon error. Comparisons throughout this work use that function with blind faith that it’s more efficient and accurate than the best power series approximation we were able to use.

How could you do it with Monte Carlo?

The idea behind Monte Carlo integration is simple. To approximate

As the total number of random points increases the approximation converges toward the true value.

At first glance our initial integral

isn’t lending itself to Monte Carlo integration. Not only do we have unknown \(a\) both in the integrand and in the limit, there’s also a lovely asymptote at \(x = a\). It’s not ideal for making a general tool. 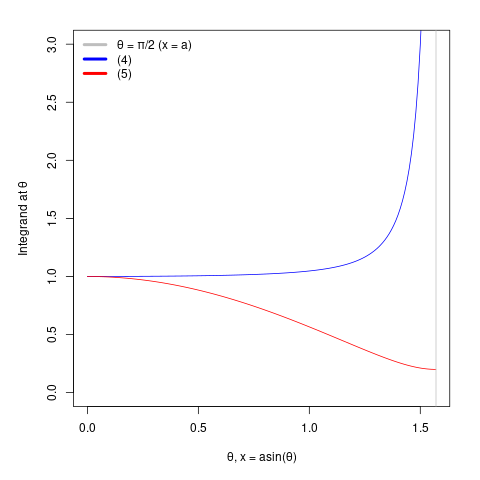 On the other hand, the transformation of that integral

is far more inviting. The integrand plot can be enclosed by \([0,~\pi/2] \times [0,~1]\), making it a perfect candidate for doing Monte Carlo integration!

We coded up a simple function in R for doing this for arbitrary \(a\) and \(b\).

We’re not the first to apply Monte Carlo to this problem; Gary Gipson (1982) explored the idea more generally as part of his PhD thesis.11

In particular, the graph on the left approximates the ellipse’s circumference as

meaning there’s about 2% error. To see how this compares in absolute value terms, the table below has all our approximations all side by side for varying \(a\).

We can see that Monte Carlo isn’t terrible, but it’s also not as good as some of even our more basic approximations like Parker. That begs the question…

Why use Monte Carlo to approximate circumference? 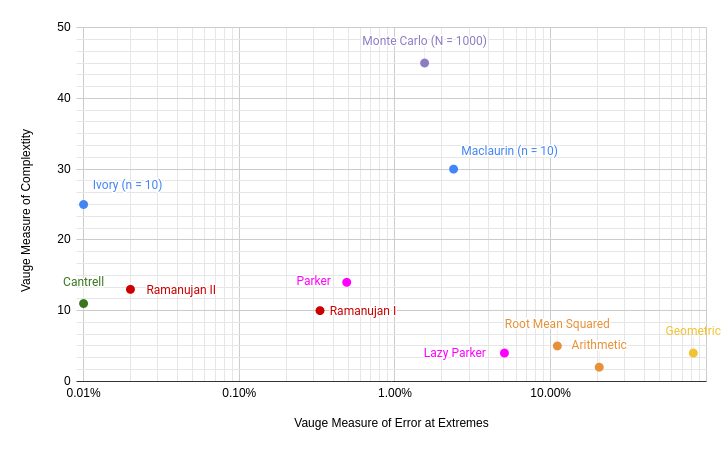 Given Monte Carlo isn’t more efficient, more accurate, or simpler to state than any of the other approximations given here there’s not a clear reason to use it beyond academic curiosity. A better question though might be…

Why use ellipses to demonstrate Monte Carlo?

Monte Carlo approximations aren’t difficult to understand; I’ve a memory of being taught the basics around Y8 (12 years old). We were given a coin to toss 100 times, recording the results and working out the approximate probability of heads by dividing the number of times it happened by 100. It’s not a very exciting demonstration, but it works.

That’s for showing it to a younger audience though, what about when you’re showing it to undergrads? The go-to examples are integration or calculating \(\pi\).

As we did for our elliptic integral, given \(p(x) = a_n x^n + a_{n-1}x^{n-1} + \cdots + a_0\) we can approximate \(\int_{x_1}^{x_2} p(x){\mathrm{d}x}\) by generating \(N\) uniform random points in a box bounding \(p\) between \(x_1\) and \(x_2\), counting the number of that fall below \(p\) and dividing that by \(N\). While the idea is still simple, it’s not exactly interesting and feels pretty redundant; polynomial integration can be done exactly and is borderline trivial for most undergrads. Even if \(p\) were to be more complicated, students will be painfully aware there are better approximation methods.

Approximating \(\pi\) has other problems. It’s still integral approximation at heart so it’s not complicated, but it has the aura of a pointless exercise. It does have the advantage of being a well known constant and seeing the approximation converge is a neat demonstration, but how Monte Carlo is being used here is very specific to \(\pi\) and not widely applicable.

Putting aside that it’s not necessarily the best tool for the job, there are some benefits to using ellipse circumference in a Monte Carlo demonstration:

A downside to bare in mind that it prompts the question, ‘why is this integral non-elementary?’ to which there’s no easy answer; get your references to take higher year integrability courses at the ready!

That aside though, Monte Carlo Elliptic Integrals is a neat tool being applied to an cool problem in a way that’s both interesting and understandable. It’s a good motivator for why Monte Carlo methods might be useful in a practical setting while not presenting an application beyond the understanding of a novice mathematician.